India has the highest mountain chain on earth, the Himalayas, which are formed due to collision of Indian and Eurasian plate, the northward movement of the Indian plate towards China causes continuous stress on the rocks rendering them friable, weak and prone to landslides and earthquakes. The slow motion of the Indian crust, about 5 cm/year accumulates stress to which natural disasters are attributed. Some landslides make unique, and unparalleled catastrophes. Landslides and avalanches are among the major hydro-geological hazards that affect large parts of India besides the Himalayas, the Northeastern hill ranges, the Western Ghats, the Nilgiris, the Eastern Ghats and the Vindhyans, in that order, covering about 15 % of the landmass. The Himalayas alone count for landslides of every fame, name and description- big and small, quick and creeping, ancient and new. The Northeastern region is badly affected by landslide problems of a bewildering variety. Landslides in the Darjeeling district of West Bengal as also those in Sikkim, Mizoram, Tripura, Meghalaya, Assam, Nagaland and Arunachal Pradesh pose chronic problems, causing recurring economic losses worth billions of rupees. A different variety of landslides, characterized by a lateritic cap, pose constant threat to the Western Ghats in the South, along the steep slopes overlooking the Konkan coast besides Nilgiris, which is highly landslide prone.

Some spectacular events of tragedies are reported as Varnavat landslide, Uttarkashi District, Malpha landslide Pithoragarh district, Okhimath landslide in Chamoli district, UK and Paglajhora in Darjeeling district as well as Sikkim, Aizawl sports complex, Mizoram.These are some of the more recent examples of landslides. The problem therefore needs to be tackled for mitigation and management for which hazard zones have to be identified and specific slides to be stabilized and managed in addition to monitoring and early warning systems to be placed at selected sites.

A general landslide hazard map of India shown here marks the areas of different hazard zones in various states of India; one may note that Himalayas of Northwest and Northeast India and the Western Ghats are two regions of high vulnerability and are landslide prone. 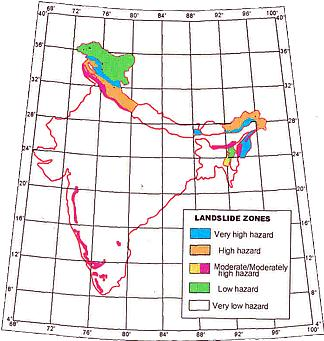 NDMA guidelines are being followed for Landslide Hazard Zonation (LHZ) maps at 1: 50,000 scale and progressively larger scales for specific areas. National Remote Sensing Center (NRSC),Department of Science and Technology (DST), Council of Scientific and Industrial Research (CSIR), Indian Institute of India (IITs), Universities have done tremendous work in this regard. The NRSC Atlas on selected corridors of Uttarakhand and Himachal Pradesh has been a very useful Atlas (Please see NRSC work on Landslides). DST has funded more than 30 projects spread over India by various academic institutions the reports of which can be requested from DST (NRDMA).

An example of LHZ map at 1: 50,000 scale from a part of Himalayas in Chamoli district (Pachauri, 1992) shown here is based upon several geological, geotechnical parameters. Such maps are being refined and relooked for higher level of verification and acceptability for public use. Approximately 15 % of the Indian landmass has to be covered by such maps at 1: 50,000 scale or higher to classify slopes in various levels of hazards. Geographical Information System (GIS) and Remote Sensing applications are being used through NRSC under a special group of GIS for LHZ at NDMA through database collection from all concerned departments and being stored through good offices of GIS and other agencies, CSIR labs, DST etc as a parallel theme on landslide mitigation. 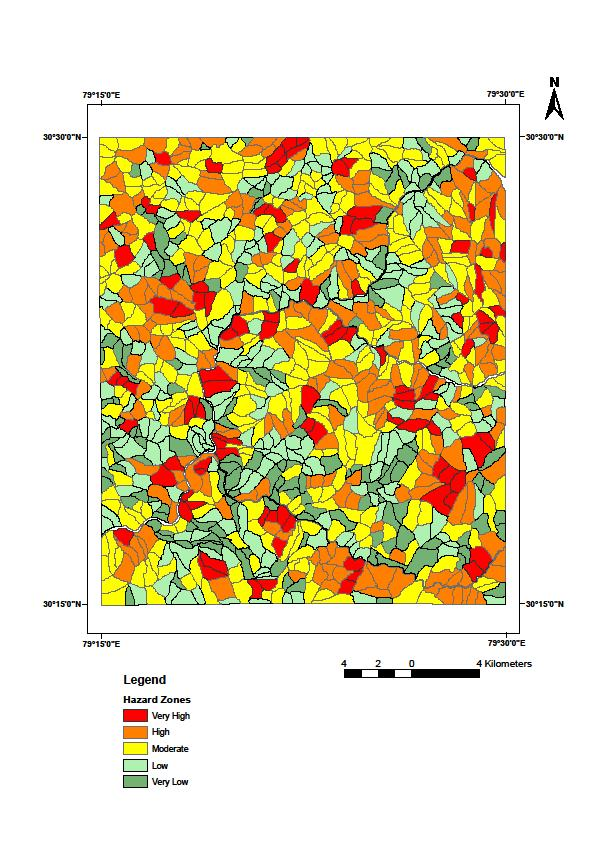 Remain calm and be alert and awake, listen to warnings of heavy and prolonged period of rainfall from weather station, if your home is located below a debris covered area move away to safer place, listen to sounds of rock fall, moving debris and cracking of trees, or cracks in ground or any movement. Keep a battery operated ready for the night.

Report any damage of roads, power and telephone lines to concerned authorities.