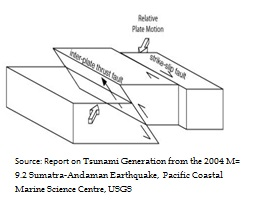 The Earth's lithosphere is broken up into a bunch of discrete pieces, called plates that move around the surface of the planet. There are seven or eight major plates (depending on how they are defined) and many minor plates.  This motion is driven by the flow of the mantle rock beneath the plates and by the forces plates exert at their boundaries where they touch each other.  Earthquakes happen when plates move with respect to each other because of the friction and stress at the edges of plates prevents them from slipping smoothly at their boundaries. When one plate is forced to dive beneath another plate, there is no way to do it except with some component of vertical motion creating tsunami (please see figure) .

The tsunami that occurred during 2004 Sumatra-Andaman earthquake of Mw 9.3 was primarily caused by vertical displacement of the seafloor, in response to slip on the inter-plate thrust fault.  The earthquake and resulting tsunami in the Indian Ocean affected many countries in Southeast Asia and beyond, including Indonesia, Sri Lanka, India, Thailand, the Maldives, Somalia, Myanmar, Malaysia, Seychelles and others. Many other countries, especially Australia and those in Europe incurred casualties due to the tsunami, because they had large numbers of citizens traveling in the region on holiday. This tsunami-genic earthquake was one of the ten worst earthquakes in recorded history, as well as the single worst tsunami in history. Indonesia was the worst affected country. Beyond the heavy toll on human lives, the Indian Ocean earthquake has caused an enormous environmental impact that will affect the region for many years to come. The disaster also caused a substantial geo-physical impact in Indian Ocean. The disaster invited attention of affected countries for setting up effective tsunami early warning system and institutional mechanism for handling disasters.

The Government of India has put in place an Early Warning System for mitigation of such oceanogenic disasters under the control of Indian National Center for Ocean Information Services (INCOIS), Hyderabad. A state-of-the-art early warning centre was established with the necessary computational and communication infrastructure that enables reception of real-time data from  sensors, analysis of the data, generation and dissemination of tsunami advisories following a standard operating procedure. Seismic and sea-level data are continuously monitored in the Early Warning Centre using custom-built software application that generates alarms/alerts in the warning centre whenever a pre-set threshold is crossed. Tsunami warnings/watches are then generated based on pre-set decision support rules and disseminated to the concerned authorities for action, as per pre-decided standard operating procedure. The efficiency of this end-to-end system was proved during the large under-sea earthquake of 8.4 M that occurred on September 12, 2007 in the Indian Ocean.

The Guidelines recommends practical and effective ways for awareness generation, capacity building, education, training and research & development for better tsunami risk management.  The Guidelines explore options for effective dissemination of tsunami alert and warning messages generated by INCOIS to the concerned agencies and coastal vulnerable communities exposed to tsunamis in a coordinated manner.

Structural Mitigation measures, as envisaged in the Guidelines, gives a brief guidance on design and construction of new structures as well as strategies for protecting lifeline and priority structures from Tsunamis along the seafront. The Guidelines urge BIS to roll out the pending construction standards entitled ‘Criteria for Tsunami-Resistant Design of Structures’. It further recommends a robust techno-legal regime through efficient land use practices, bioshields, shelter belt plantation and mangrove regeneration with community involvement. A strong mechanism has been recommended for effective emergency response by involving local police network, civil defence volunteers wherever available, home guards, State Disaster Response Forces and National Disaster Response Force. Further, the Guidelines explore the  provisions of Disaster Management Act 2005 to mainstream concern of Tsunami risk management in disaster management plans of various levels. 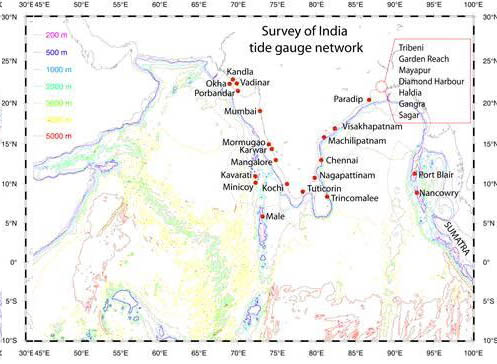